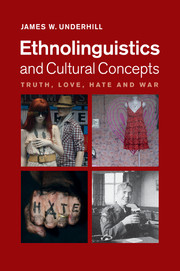 Ethnolinguistics' is the study of how language relates to culture and ethnicity. This book offers an original approach to ethnolinguistics, discussing how abstract concepts such as truth, love, hate and war are expressed across cultures and ethnicities. James W. Underhill seeks to situate these key cultural concepts within four languages (English, French, Czech and German). Not only do these concepts differ from language to language, but they go on changing over time. The book explores issues such as how far meaning is politically and culturally influenced, how far language shapes the thought of ethnic groups and how far their thought shapes language, and the role of individuals in the consolidation of cultural concepts. It offers a clear and thought-provoking account of how concepts are understood and will be welcomed by those working in the fields of sociolinguistics, linguistic anthropology, discourse analysis, semantics and pragmatics.
James W. Underhill is founder of the Rouen Ethnolinguistics project and author of books on language & worldview, on poetics and translation theory. He lectures on Literature, Theory of Language, Communication , and Poetics at Rouen University, in Northern France.